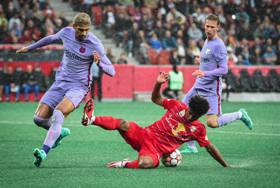 Four players of Nigerian descent aged 21 and under were given minutes by Red Bull Salzburg manager Matthias Jaissle as they pulled off a sensational shock 2-1 win over La Liga giants Barcelona in a pre-season friendly staged at the Red Bull Arena on Wednesday, August 4.
In a 4-4-2 formation deployed by the German football manager, Noah Okafor, 21, and 19-year-old Karim Adeyemi led the attack.
In the opening thirty minutes, Germany U21 international Adeyemi continuously created havoc among the opponents defence without being able to break the deadlock.
Okafor missed a glorious chance to open the scoring when the ball was put on a plate for him by Adeyemi in the 38th minute but he narrowly shot wide of the far post.
Luka Sucic finally put the home side in front with an absolute screamer from 25 meters, with Adeyemi providing the assist for his wonder strike.
Kano-born striker Chukwubuike Adamu, 20, played the whole of the second half for the Austrian side and American-Swiss-Nigerian-Congolese defender Bryan Okoh, 18, hopped off the bench with a minute remaining.
Martin Braithwaite netted a bizarre equaliser for Barcelona nine minutes from time only for Brenden Aaronson to score the winner in the 90th minute.
Aaronson was quickest to react after Adamu's left-footed shot from inside the area struck the post.
Ifeanyi Emmanuel
Photo Credit : redbullsalzburg.at
Copyright ANS