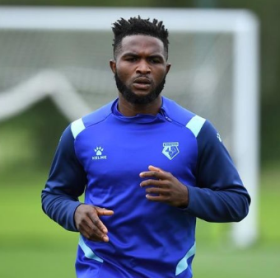 Isaac Success is reluctant to re-join Udinese in the summer transfer window, according to Watford Observer citing The Athletic.
The former Golden Eaglets striker was acquired by Udinese from BJ Foundation in January 2014 before he was loaned out to Granada few months later.
Should Success stay put at Vicarage Road for the forthcoming season, he is not assured of game time, with the Hornets bringing in attack-minded players Emmanuel Dennis, Ashley Fletcher and Joshua King to bolster the squad.
Success reported for pre-season training early as he aimed to force his way into the plans of Watford manager Xisco but it appears he is surplus to requirements as he wasn't selected for pre-season friendlies against Arsenal, Stevenage, West Brom, Brentford and Doncaster Rovers.
The 25-year-old would be open to a loan move to a Championship club but potential suitors are few and far between.
Udinese are interested in bringing Success back to Italy and a loan move would suit all the parties if a permanent deal cannot be thrashed out.
The 2013 U17 World Cup winner has two years left to run on his contract with Watford.
Ifeanyi Emmanuel
Copyright ANS