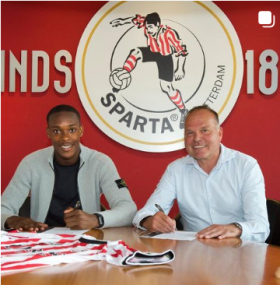 Through their official website, Dutch Eredivisie side Sparta Rotterdam have announced that promising striker Emanuel Emegha's contract has been extended for two seasons.
The new deal will keep the 18-year-old at De Kasteelheren until at least June 2024, with an option for another year.
Emegha is the second Nigeria-eligible youngster to sign a fresh contract at Sparta Rotterdam this month, following in the footsteps of Super Eagles goalkeeper Maduka Okoye whose contract renewal was announced on August 4.
Interestingly the two players share the same agent in former Feyenoord star Wessel Weezenberg who also looks after Super Eagles fullback Tyronne Ebuehi.
Commenting on his new deal, Emegha said to Sparta Rotterdam's official website : "I am very happy to sign a new contract with the club where I have been playing for years.
"I look forward to the coming Eredivisie season, in which I hope for even more playing minutes and goals than last season and hope that I can be of value to the team."
Emegha totaled eighteen appearances for Sparta Rotterdam in all competitions last season and was in action for 439 minutes.
Born in the Netherlands, he is eligible to represent the national teams of Nigeria and Togo through his mom and dad respectively.
Igho Kingsley
Copyright ANS