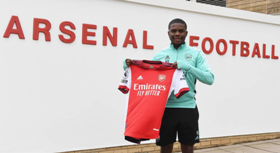 Through their official website, Arsenal have announced that exciting winger of Nigerian descent Nathan Butler-Oyedeji has signed a new deal with the club.
Butler-Oyedeji has ended speculation surrounding his future after putting pen to paper on his first professional contract with the Gunners.
Born in London on January 4, 2003, Butler-Oyedeji is eligible to represent the national teams of England, Nigeria and St. Vincent and the Grenadines.
He has been on the books of Arsenal since the age of six, with the Gunners beating London rivals Chelsea and Leyton Orient to his signature.
A winger known for his pace and dribbling ability, he made thirteen league appearances for Arsenal U18s last season and was also involved in the FA Youth Cup and Premier League 2.
Speaking on his new contract, Butler-Oyedeji said : "This is a great opportunity for me and I just want to focus on doing what I do best now.
"I've been here since I was six, so to come all this way and get my first professional contract is a dream come true."
Butler-Oyedeji is the fourth Nigeria-eligible teenager to sign a new deal at Arsenal this summer, after Arthur Okonkwo, Mazeed Ogungbo and Ovie Ejeheri.
Ifeanyi Emmanuel
Photo Credit : arsenal.com
Copyright ANS