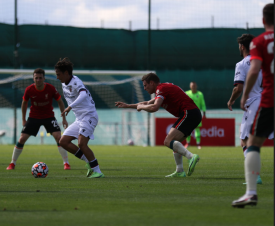 Bologna manager Siniša Mihajlović continues to run the rule over 2015 U17 World Cup winner Kingsley Michael before making a decision on his future with the Serie A club.
Bologna faced Liverpool in a pair of 60-minute friendly matches on Thursday afternoon, with the Nigeria underage international starting for the Red and Blues in the second game at the Stade Camille Fournier.
Playing as a central midfielder, Kingsley held his own against one of the best holding midfielders in the Premier League, Fabinho, and Alex Oxlade-Chamberlain who was deployed on the right side of Liverpool's midfield.
Fabinho, who reported for Liverpool's pre-season training at the weekend, made way for Leighton Clarkson after half an hour.
Takumi Minamino netted the only goal of the second clash, beating the offside trap before volleying the ball into the back of the net in the 14th minute.
Prior to today's meeting against Liverpool, Michael was given minutes in another high profile friendly against Borussia Dortmund last Friday.
The Football College Abuja product is aiming to impress Mihajlović during pre-season after he was shipped out on loan to AC Perugia Calcio, Cremonese and Reggina in the last few seasons.
Michael has made three appearances for Bologna's first team since joining the club in 2017.
Ifeanyi Emmanuel
Photo Credit : bolognafc.it
Copyright ANS