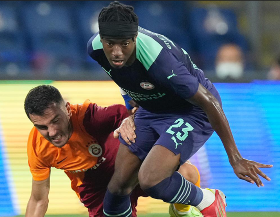 According to the Evening Standard, Tottenham Hotspur are showing interest in signing Anglo-Nigerian winger Nonso Madueke this summer but face competition from other Premier League clubs.
Tottenham are in the market for a creative player with Madueke and Sampdoria's Damsgaard players of interest.
The Italy international, who is valued in the region of £42m, may be too expensive for Spurs if players are not sold to bolster the transfer kitty, and the England U21 international could be a cheaper alternative.
Three years ago, Spurs let Madueke leave on a free transfer and they want him in their ranks again after he proved himself abroad at PSV Eindhoven.
Crystal Palace, Leeds United and Southampton are also in the running for the signature of Maduke, while German champions Bayern Munich have also been credited with an interest.
The 19-year-old scored many goals in pre-season for PSV and has caught the eye in the Champions League qualifiers, with a goal involvement of three in three games, including a brilliant strike from outside the box versus FC Midtjylland.
He has a contract with the Eindhoven based club until the end of the 2023-2024 season.
Igho Kingsley
Photo Credit : psv.nl
Copyright ANS