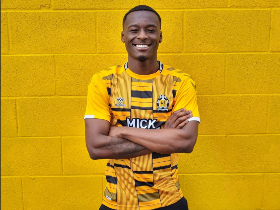 Through their official website, EFL League One newcomers Cambridge United have announced the permanent acquisition of Tottenham Hotspur's Nigeria-eligible defender Jubril Okedina.
Okedina spent the second half of last season on loan at Cambridge United, helping them seal promotion to the third-tier with fourteen appearances in the League Two.
His other appearance for United was against Oxford United in the EFL Trophy back in January.
The 20-year-old has put pen to paper on a two-year contract at Cambridge United and will be wearing the number 15 kit for the 2021-2022 season.
"I am very happy to be back. It just made sense for me to come back here with people I know and in a higher league," Okedina stated.
"The conversations with the Manager have been very positive and I can’t wait to get going now and to finally play in-front of the fans."
Okedina, who captained Tottenham Hotspur U23s in some matches last term, departs the north London club without making his senior debut but trained with the first team on several occasions including this pre-season.
Igho Kingsley
Photo Credit : cambridge-united.co.uk
Copyright ANS