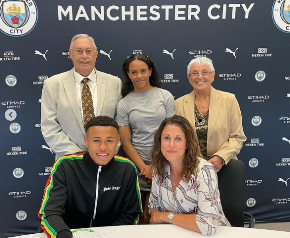 Young talented Nigerian striker Tai Sodje is delighted to sign a new contract at Premier League champions Manchester City.
As a reminder, The Citizens announced exactly three weeks ago that seventeen of their players who contributed to the club winning the U18 Premier League national title and Premier League 2 have signed their first professional contracts.
Allnigeriasoccer.com has been told that the signing ceremony and photo shoot was recently held at Manchester City.
Sodje's mother, sister, grandmother, grandfather and agent accompanied him to the ceremony, and posed for the cameras with the teenage attacker.
Sodje was offered his first professional contract after making a splash in the U18 Premier League last season, scoring 19 goals in 22 appearances, including a hat-trick against Liverpool, to finish 2020-2021 as the club's top scorer in the division.
Reacting to his new deal, Tai, the nephew of former Nigeria international defenders Efe and Sam Sodje, posted on Instagram, "Happy to sign my first pro contract 📝".
Sodje seems to have impressed Shola Shoretire last season as the Manchester United rising star was among the players of Nigerian descent who congratulated him on his new contract.
Responding to Sodje's post, Shoretire said : "well done bro👏❤️".
Chelsea's Derrick Abu, Rangers' Malcolm Ebiowei, ex-Man City starlet Noah Ohio and City winger Samuel Edozie also sent messages of congratulations to Tai Sodje.
Ifeanyi Emmanuel
Copyright ANS