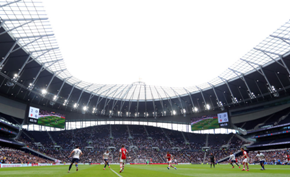 Tottenham Hotspur rounded off their pre-season preparations with a 1-0 win over north London neighbors Arsenal in their final outing in the Mind Series on Sunday afternoon.
Hale End Academy product Tobi Omole was an unused substitute against his former club while Folarin Balogun was back in action after he was left out of the squad that lost to Chelsea.
2021 Super Eagles invitee for the friendly against Mexico last month Joshua Oluwayemi and fellow goalkeeper Arthur Okonkwo did not make the squad for Tottenham and Arsenal respectively.
Oluwayemi played 68 minutes of Tottenham Hotspur U23s 1-1 draw with National League club Barnet on Saturday, August 7.
There was nothing to separate the two sides at the break as it remained goalless but Dele Alli and Alexandre Lacazette came close to breaking the deadlock when they hit the woodwork.
On the hour mark Dele hit the woodwork again, thirteen minutes before the introduction of Folarin Balogun.
In the 79th minute, Heung-Min Son got on the scoresheet, firing in from close range, assisted by Japhet Tanganga.
Tottenham Hotspur begin their Premier League campaign against Manchester City on August 15 while Arsenal face new boys Brentford in the curtain-raiser on Friday.
Ifeanyi Emmanuel
Photo Credit : tottenhamhotspur.com
Copyright ANS