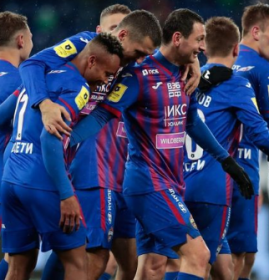 CSKA Moscow continue to struggle in the early part of the season, losing 2-1 to Dynamo Moscow at the VTB Arena on game week three in the Russian Premier League on Sunday evening.
The Muscovites began their campaign with a narrow 1-0 win vs Ufa and lost 2-1 to Lokomotiv Moscow the following weekend.
Nigeria international Chidera Ejuke opened the scoring for the Army Men when he sprinted into the box before curling a shot into the top corner in the eighth minute.
But Dynamo Moscow, who had won their previous two games, hit back with two second half goals from Daniil Fomin.
The Russia international converted a spot kick to equalise for Dynamo Moscow in the 58th minute and netted the winner in the 73rd minute after he was set up by Denis Makarov.
Ejuke was subbed in in CSKA Moscow's first two matches of the season before earning his first start in this evening's derby.
Aleksey Berezutski's men, who are tenth in the table, travel to Rostov in the next round of matches.
Igho Kingsley
Copyright ANS