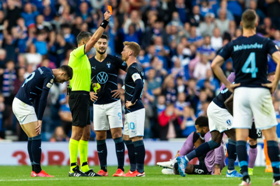 A very disciplined Malmo side came from behind to register an impressive 2-1 win over Glasgow Rangers in the second leg of the UEFA Champions League third qualifying round at Ibrox Stadium on Tuesday night.
The Light Blues got off to a sensational start and were rewarded in the 18th minute when Alfredo Morelos opened the scoring with a deft header, but Malmo did almost the impossible, scoring two quickfire second half goals through
Antonio-Mirko Colak.
Malmo played with ten men for at least half of the game after Nigerian defensive midfielder Innocent Bonke was dismissed for a second bookable offense in first-half stoppage time.
Bonke was first shown a yellow card for a clumsy foul on Morelos and got his marching orders four minutes later after a late challenge on Goldson.
Malmo manager Jon Dahl Tomasson has suggested that Rangers goalkeeper Allan McGregor should have been sent off  for touching the ball outside the penalty area in the first half.
Despite denying the opponents a potential goal-scoring opportunity, McGregor received only a yellow card in the 34th minute.
Comparing the two incidents, Tomasson  said at the post-match press conference : "I haven't seen it back, I think the referee is always doing his best and things go very quickly.

"It's the same with the goalie (Allan McGregor) picking up the ball outside the box when we are 1v1 with the goalie, I haven't seen that as well.".
Bonke, who has been involved in all the six games played by Malmo in Champions League qualifying, will not be available for selection against PFC Ludogorets Razgrad in the playoff round next week.
Ifeanyi Emmanuel
Photo Credit : rangers.co.uk
Copyright ANS