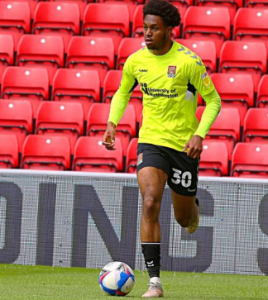 Former England international of Nigerian descent Gabby Agbonlahor is tipping Aston Villa to win the race for the signature of Nigerian teenager Caleb Chukwuemeka.
Tottenham Hotspur were thought to be in the driving seat for the Northampton frontman but Villa have stolen a march on their rivals.
Spurs were looking to use another player of Nigerian descent in Kion Etete as makeweight in the proposed deal taking Chukwuemeka to north London but the 19-year-old has completed a loan move to the League Two club without the Northampton Town rising star moving in the opposite direction.
Caleb's younger brother Carney Chukwuemeka is on the periphery of Aston Villa's first team, making two appearances in the Premier League last season, and that could swing the deal in their favour.
"I’d back them to go that one over the line. I think it’d be an excellent deal too," former Aston Villa striker Agbonlahor told Football Insider.

"I’ve heard a lot about him. He is a very talented player just like his brother. With his brother there, he could help get that transfer over the line.

"You look at Aston Villa and there have been so many young players involved in pre-season. They also gave out a lot of debuts last season.

"It’s a club that young players are going to want to come to and try and develop there."
Caleb Chukwuemeka was not given minutes in Northampton Town's first two competitive matches of the new season with Port Vale and Coventry City amid speculation surrounding his future.
Ifeanyi Emmanuel
Photo Credit : ntfc.co.uk
Copyright ANS