...the complete Nigerian football portal
Subscribe
'He looks 28 but only 20' - Kompany not putting pressure on Bayern loanee Zirkzee after brace
Published: August 16, 2021 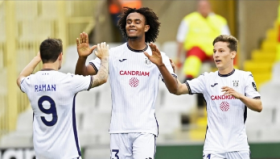 Anderlecht boss Vincent Kompany has emphasized that he's not putting pressure on Bayern Munich loanee Joshua Zirkzee following his brace against Cercle Brugge in a Belgian First Division A clash on Sunday.
The Dutch-Nigerian youngster came in for criticism from the media and fans after he missed a gilt-edged opportunity in a pre-season friendly between Bayern and Ajax Amsterdam last month.
He took too long to tap the ball in and center back Perr Schuurs made a stunning recovery tackle to clear the ball on the line.
But Zirkzee showed he can score goals during the tie against Cercle, netting his first goal in Belgian football with a simple shot from close range in the 13th minute before scoring a goal of the season contender from outside the box just before the half hour mark.
"He looks 28, but he's only 20. When you see him with guys three heads shorter, you know Josh is still a kid," Kompany was quoted as saying by Het Nieuwsblad.
Zirkzee was linked with a possible move to his past club Feyenoord but opted to join Anderlecht instead after talks with the former Manchester City captain.
Explaining the reason behind his decision, the Netherlands U21 international said : "Let them have a good chat there. I had a good conversation with Vincent Kompany – who I looked up to – and I was sold.
"Anderlecht is a top club in Belgium. Can we handle Vitesse on Thursday? It will be an exciting match, but I am convinced of my own team".
Zirkzee, who is credited with four goals in seventeen appearances for parent club Bayern Munich, spent the second half of last season on loan at Parma in Italy.
Igho Kingsley
Photo Credit : rsca.be
Copyright ANS