...the complete Nigerian football portal
Subscribe
AFCON 2021: Sudan in talks with German-born midfielder who shone vs Nigeria at U20 World Cup
Published: August 18, 2021 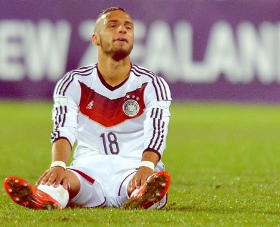 Nigeria's second opponent in the group stage of the 2021 Africa Cup of Nations, Sudan are confident of convincing German-born attacking midfielder Hany Mukhtar to switch his international allegiance to the Falcons ahead of the tournament holding in Cameroon.
The Hertha Berlin academy product was one of the standout players for Germany at the 2015 FIFA U20 World Cup, starring as the side captained by Kevin Akpoguma defeated the Flying Eagles 1-0 to advance to the quarterfinals.
Leicester City duo Kelechi Iheanacho and Wilfred Ndidi who are set to be included on the Super Eagles roster for next year's AFCON were part of the Flying Eagles squad six years ago.
Mukhtar, who now plies his trade for Nashville SC in Major League Soccer, has caps for all of Germany's youth teams - U15, U16, U17, U18, U19, U20 and U21 - but has yet to make his senior debut for the four-time world champions.
The 26-year-old is eligible to represent the Falcons through his Sudanese father.
Speaking after the 2021 AFCON draw on Tuesday, Sudan manager Hubert Velud told Filgoal : "We have some players abroad that we are trying to convince them to represent the national team, such as Hani Mukhtar, and we are in advanced discussions with him and we hope that an agreement will be reached soon".
Three-time African champions Nigeria will lock horns with Sudan at the Roumdé Adjia Stadium, Garoua on January 15, starting from 1700 hours.
Ifeanyi Emmanuel
Photo Credit : dfb.de
Copyright ANS