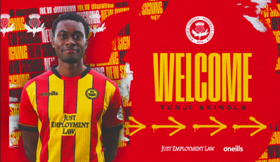 Anglo-Nigerian defender Tunji Akinola ended his search for a new employer on Wednesday, August 18.
Scottish Championship side Partick Thistle have officially announced the signing of the ball-playing central defender
on a one-year deal, subject to international clearance.
Akinola started his career at Brimsdown Rovers in north London, from where he moved to West Ham United, where he spent thirteen years before he was released at the end of the 2020-2021 campaign.
The former Hammers U23 skipper did not make his competitive debut prior to his departure but got a taste of first-team football during a loan stint at Leyton Orient, making 34 appearances in all competitions.
"Tunji has been in training with us for a week or two and we’re pleased to get him signed up for the season,"
Thistle manager Ian McCall said to the club's official website.
"He’s a strong, composed defender with plenty of pace who at the age of 22 still has plenty of improvement in him.

"He’s comfortable in either the centre of defence or at right-back so he’ll really add to the competition and depth of the squad. We’ve now got a very strong core of defensive options to select from."
For the remainder of the 2021-2022 campaign, Akinola will be wearing the number 18 on the back of his jersey.
Ifeanyi Emmanuel
Photo Credit : ptfc.co.uk
Copyright ANS