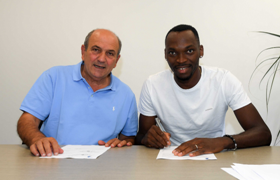 Through their official website, Italian Serie A side US Salernitana 1919 have announced that they have reached an agreement with Crotone for the temporary transfer of Simeon Tochukwu Nwankwo.
Simy's loan deal with Salernitana comes with an obligation to buy him outright.
The Super Eagles striker had been linked with possible moves to clubs in Italy, Spain, Turkey, France and England after putting himself in the shop window last season at Crotone.
In 38 league outings for the demoted Serie A club, he scored 20 goals in 2,942 minutes of action.
Prior to his move to Crotone in 2016, he turned out for Portuguese clubs Gil Vicente FC and Portimonense Futebol SAD.
A product of GUO FC, Simy was a member of the Super Eagles squad to the 2018 World Cup, featuring in group matches against Croatia and Argentina.
He will be wearing the number 25 jersey at Salernitana, same number he wore at Crotone.
Igho Kingsley
Photo Credit : ussalernitana1919.it
Copyright ANS