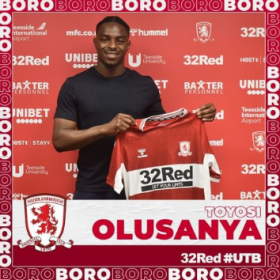 Through a statement on their official website, EFL Championship club Middlesbrough FC have announced that they have completed the signing of Nigerian striker Toyosi Olusanya on a two-year contract.
Boro confirmed that the 23-year-old trialed with a number of Premier League clubs including Chelsea and Wolverhampton Wanderers, and had attracted interest from Manchester City and Newcastle United following his departure from AFC Wimbledon.
Born in South London, Olusanya has made one appearance in the Football League and it came against Newport County in May 2016.
Before joining AFC Wimbledon academy in 2015, he had spells with Mass and Palace Guard.
Commenting on his brand new signing, manager Neil Warnock said: "I wanted to give him an opportunity.

"I came from non-league myself, I watched him play and I just had hunch. He knows Isaiah [Jones] too which is a plus.

"I hope he enjoys himself here, it's a big ask but I hope he can excite everyone here like he excites me. He's got a great attitude."
Olusanya links up with Super Eagles hopefuls Uche Ikpeazu and Chuks Aneke at Middlesbrough.
The former Kingstonian, Walton Casuals and Gosport Borough star will be wearing the number 13 jersey in his first season at Boro.
Ifeanyi Emmanuel
Photo Credit : mfc.co.uk