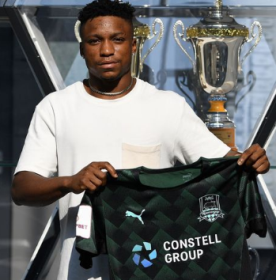 Russian club FC Krasnodar took to social media on Monday afternoon to announce the signing of Nigeria underage international Olakunle Olusegun.
Less than a week after joining Botev Plovdiv on a permanent deal, the Bulgarian club have loaned the striker to Krasnodar.
Krasnodar have made it clear that Olusegun will be representing their second team in the Football National League, equivalent of second-tier of Russian football, for the remainder of the season.
Reacting to his move to Krasnodar, he posted on Instagram : "Taking a risk is already a risk itself. Those with empty heart hate to take the reasonable risk to success,glory be to God new adventure @fckrasnodar2".
Olusegun was one of the standout players for the Golden Eaglets at the 2019 U17 AFCON and FIFA U17 World Cup, playing nine games combined in both tournaments, scoring two goals.
A year after the tournament in Brazil, he sealed a transfer to Danish club Fremad Amager, for whom he scored 12 goals in 40 appearances.
Igho Kingsley
Copyright ANS