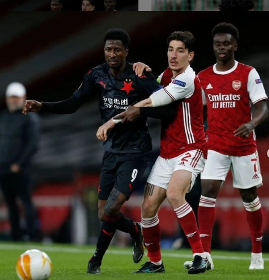 Peter Olayinka's proposed move to Danish Superliga giants FC Copenhagen is dead in the water.
FC Copenhagen had targeted the Slavia Prague star as a replacement for Mohamed Daramy, who is linked with an imminent switch to Ajax Amsterdam.
Slavia Prague had agreed to end their association with the Super Eagles striker before the expiration of his contract in exchange for 3.5 million euros.
According to various reports in the Danish press, including Tipsbladet, an ankle injury Olayinka is currently nursing meant he failed a medical at FC Copenhagen.
Slavia Prague coach Jindrich Trpisovsky confirmed at the pre-match press conference before his side's Europa League play-off second leg tie against Legia Warsaw that Olayinka's transfer fell through at the last minute.
"Peter Olayinka had an offer from Copenhagen, where he flew, so he did not fly with us," Trpisovsky told reporters.
"During the day, however, I received information that he would join the team again in the evening because the transfer had fallen.
"We are missing a lot of wing players, so we are counting on him for tomorrow's match."
Olayinka has racked up 110 appearances for Slavia Prague, scoring 22 goals and chipping in with 15 assists.
Ifeanyi Emmanuel
Photo Credit : slavia.cz