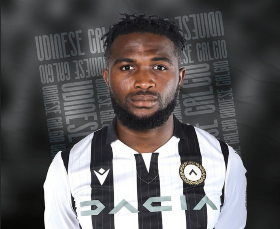 Allnigeriasoccer.com can exclusively report that newly-signed Udinese striker Isaac Success has chosen a shirt number at his new employer.
The former Watford player will be wearing the number 14 on the back of his jersey for the remainder of the 2021-2022 campaign.
Udinese's number 14 kit was vacant following the departure of Kevin Bonifazi at the end of last season.
Previously, Success had never worn the number 14 in his professional career, having been assigned number 10 and 22 at Watford, 17 at Malaga, while he wore the numbers 11, 29, 33 and 36 during his time at Granada.
The BJ Foundation product wore the number 9 at the 2013 FIFA U17 World Cup and 2015 FIFA U20 World Cup.
Other players who have worn the number 14 at Udinese include Petar Micin, Jakub Jankto, Frano Mlinar,Fabián Orellana, Antonio Candreva, David Pizarro and Jorginho Paulista.
Success completed his move to Udinese on Thursday, signing a three-year deal that will keep him at the Bianconeri until June 30, 2024.
Ifeanyi Emmanuel
Copyright ANS