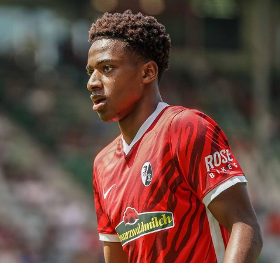 The German Football Association (DFB) has announced its rosters for the age group national teams ahead of international matches and training camps in September, with five Nigeria-eligible players handed call-ups.
Bayern Munich academy products Kimberly Ezekwem and Jamie Lawrence, and SC Freiburg goalkeeper Noah Atubolu have been invited to Germany U20 squad for friendlies against Czech Republic and Norway on September 2 and September 6 respectively.
While Ezekwem has earned his first call-up to Germany, Atubolu and Lawrence previously played for the youth teams.
Now at Freiburg, Ezekwem has been handed a maiden invite after a remarkable 2020-2021 campaign that saw him muster fourteen assists from his defensive position in 37 matches for SC Freiburg II in the Regionalliga Südwest, helping them gain promotion to the third tier of German football.
VfL Wolfsburg central defender David Odogu and RB Leipzig attacking midfielder Adriano Onyegbule are in line to earn their first caps for Germany's youth team in Traunstein.
The German-Nigerian duo have been named in Germany U16 squad for the international matches against Austria.
Five Nigeria-Eligible Players Called Up By Germany
1) Kimberly Ezekwem (SC Freiburg) - U20
2) Noah Atubolu (SC Freiburg) - U20
3) Jamie Lawrence (Bayern Munich) - U20
4) David Odogu (Wolfsburg) - U16
5) Adriano Onyegbule (RB Leipzig) - U16
Ifeanyi Emmanuel
Copyright ANS