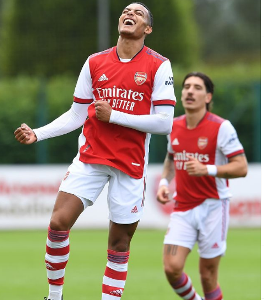 Speaking to reporters after his side's 1-0 loss to Wigan Athletic on Saturday, Portsmouth boss Danny Cowley has admitted that Arsenal midfielder of Nigerian descent Miguel Azeez is a player of interest to the League One club but played down speculation that a deal was imminent.
Portsmouth seemed to have made progress with the transfer of the England youth international after reports surfaced that the highly-rated teenager traveled to Portsmouth to undergo a medical.

Azeez was missing from Arsenal U23s line-up in their 2-1 Premier League 2 win against Tottenham Hotspur on Friday afternoon and was not involved for the first team against Manchester City this afternoon amid speculation surrounding his future.


The 18-year-old is in the final year of his contract at Arsenal but there's an option to extend by a further two years before the end of the 2021-2022 season.
Asked if a deal was imminent, Cowley was quoted as saying by The News : "No, no. He's a player we're aware of and know but we have to wait and see how it will all unfold

"For us it's not to talk about a player that's at another club. We're respectful to the other club involved."
Azeez made his professional debut for Arsenal last December, coming off the bench for the last seven minutes of a 4-2 win against Dundalk in the Europa League group stage.
Ifeanyi Emmanuel
Photo Credit : arsenal.com
Copyright ANS