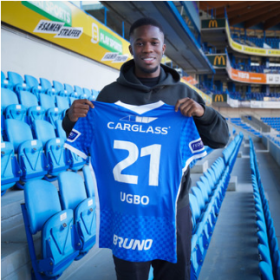 Racing Genk have confirmed their provisional squad list before Sunday evening's big clash against RSC Anderlecht at the Cegeka Arena.
Of the 21 players selected by manager John van den Brom for one of the standout fixtures in the Belgian First Division A, four are eligible to represent the Nigerian national teams.
Spanish-Nigerian-Ghanaian center back Mujaid Sadick has been listed alongside Super Eagles duo Paul Onuachu and Cyriel Dessers, and new signing from Chelsea Ike Ugbo.
The Chelsea academy product is very much in contention to be included in the finalized roster as he joined Genk in tip-top condition having trained with the first team of the European champions throughout pre-season.
Ugbo signed off his career at Chelsea by netting the game-winning goal in a 2-1 victory over Bournemouth in a pre-season friendly just over a month ago.
The 22-year-old is competing with Onuachu and Dessers for a starting spot against Anderlecht.
Bayern Munich loanee Joshua Zirkzee has been named in Anderlecht's provisional squad for the trip to Limburg province.
Ifeanyi Emmanuel
Copyright ANS