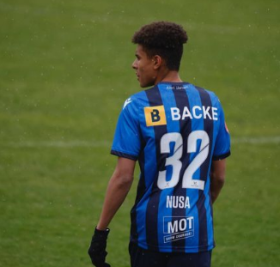 Club Brugge are reportedly in advanced talks to sign Antonio Nusa, according to matching reports in the Norwegian and Belgian press.
Dagbladet says Stabæk are in final negotiations with Club Brugge for the transfer of the Norwegian-Nigerian wonderkid.
It is claimed that Nusa has traveled to Belgium to complete his switch to the Belgian First Division A champions.
The highly-rated teenager is represented by Norwegian-Nigerian agent Atta Aneke whose flagship client is former Manchester United striker Odion Ighalo.
Nusa is the youngest player of Nigerian descent to feature in the Norwegian top-flight, aged 16 years and 43 days when he made his senior debut for Stabaek against Rosenborg on May 30, 2021.
The winger has gone on to make 13 appearances in all competitions, scoring three goals in 621 minutes of action.
Club Brugge signed the dual-eligible center back Mujaid Sadick this summer and parted company with Emmanuel Dennis while David Okereke has been loaned out to Venezia for the rest of the season.
Nusa joined Stabæk in 2013 after playing for the youth team of his hometown club Langhus IL.
Ifeanyi Emmanuel