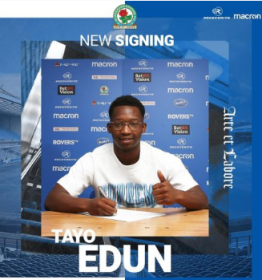 Through their official website, Blackburn Rovers have announced the permanent acquisition of versatile Anglo-Nigerian left-back or midfielder Tayo Edun from Lincoln City.
Edun has inked a three-year deal until the summer of 2024 with a twelve-month option.
The 23-year-old started his career at Fulham, with his senior debut coming in a League Cup match against Leyton Orient in August 2016.
Two seasons later, he was loaned out to Ipswich Town to gain more first team experience before sealing a permanent transfer to Lincoln City in January 2020.
Edun departs the Imps after recording 64 appearances in all competitions, contributing three goals and nine assists.
He was a key member of the England U19 squad that won the 2017 European U19 Championship and earned a place in the Team of the Tournament for his assured displays in the middle of the park.
Apart from Nigeria and England, Edun qualifies to represent the national team of St Vincent.
Igho Kingsley
Photo Credit : rovers.co.uk
Copyright ANS