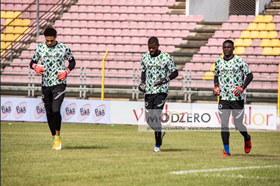 Through a press release, Cypriot First Division club APOEL Nicosia have announced that they have parted company with Super Eagles goalkeeper Francis Uzoho.
The 28-time Cypriot champions received financial compensation before shredding their agreement with Uzoho.
The Aspire Academy product departs APOEL after 24 appearances in all competitions, keeping 8 clean sheets while conceding 23 goals.
Uzoho, who is on international duty with the Nigeria squad before their 2022 World Cup qualifiers, lists Deportivo de La Coruña, Elche, Omonia Nicosia and Anorthosis Famagusta among his previous clubs.
Another player named in Nigeria's provisional 2018 World Cup squad in Uche Agbo has had his contract terminated by Primera División RFEF outfit Deportivo de La Coruña, the official website of the Spanish club has informed.
The former Watford and Udinese midfielder is now a free agent and can join a new team even after the transfer window closes after a clause in his his Deportivo de La Coruña contract was activated.
Agbo recorded 28 appearances for Deportivo and was in action for 1,700 minutes.
Ifeanyi Emmanuel
Copyright ANS
All rights reserved. This material, and other digital content on this website, may not be reproduced, published, rewritten or redistributed in whole or in part without prior express written permission from allnigeriasoccer.com