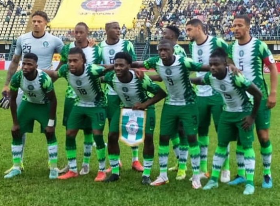 Nigeria manager Gernot Rohr was on media duties shortly after the Super Eagles defeated Liberia 2-0 in their opening match of the 2022 World Cup qualifiers.
As well as providing a squad update, the Franco-German football tactician also discussed the win versus the Lone Stars without conceding, his plans for the upcoming game against Cape Verde, United Kingdom-based players including Leicester City striker Kelechi Iheanacho.
Here's everything Rohr had to say after Friday evening's clash at the Teslim Balogun Stadium :
Congratulations on the victory against Liberia coach. Coach Nigeria 2 Liberia 0, would you say that the strategy was perfectly executed against Liberia in getting that victory?

"The job has been done, we had to win our first game at home and we didn't want to concede a goal also to show that now we are stable behind. Four or five times now we didn't concede a goal so that's a very good thing.

"We knew that some of our players had to leave after this match and they had to do well before leaving, they cannot go to Cape Verde like you know.

"We scored our two goals in the first half already so we were calm and we could in the second half play our good football without scoring a goal but it was for a moment a very good football in difficult conditions because after the heavy rain the pitch was not easy to play for the two teams but we could adapt under the circumstances and made a victory which is very important to start the World Cup qualifiers."

The next stage is the game against Cape Verde, what should Nigerians expect with the United Kingdom-based players leaving. What's your plan for the next game?

"There are nine players leaving, it's all the team so there will be another team, it's not easy to build another team in only two days, and to play on a synthetic pitch.

"It's the other side of the extreme situation, we are coming from a heavy grass after the rain to a dry synthetic pitch.

"We have to build another defence, another midfield. The goalscorer Kelechi will leave, so it will not be easy. It's a challenge for the staff and for the players but we have to show our solidarity.

"The players who are coming in now, it will be 20 players going to Cape Verde, so we will be able to make a good team.

"We have to manage this situation and I am believing that our team is able to bring another good performance even if it's more difficult than the game today".
Igho Kingsley
Copyright ANS