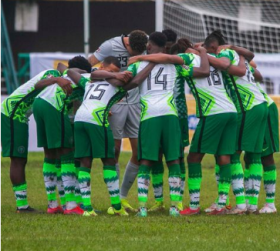 Nigeria's national team, Super Eagles, have arrived in Cape Verde, where they battle the Blue Sharks in their second match of the 2022 World Cup qualifiers.
As of an hour ago, the Super Eagles players and officials were at the Amilcar Cabral International Airport as they couldn't land in Sao Vincente where the match will be played because the Cesária évora Airport had closed.
The direct flight duration between Amilcar Cabral International Airport and Cesária évora Airport is just an hour.
Air Peace, the official airline of the national teams, flew the Super Eagles to Cape Verde, with Nigeria Football Federation boss Amaju Pinnick part of the delegation.
Air Peace Airlines Chairman, Allen Onyema, was at the airport to bid farewell to the players and promised them N20million in cash immediately they return to Nigeria if they beat Cape Verde.
Seven United Kingdom-based players Oghenekaro Etebo, Leon Balogun, Joe Aribo, Alex Iwobi, William Troost-Ekong, Wilfred Ndidi and Kelechi Iheanacho, and Chelsea academy product Ola Aina have returned to their respective clubs, so won't be available for selection against the Blue Sharks.
Heading into Tuesday's fixture at the Adérito Sena Stadium, three-time African champions Nigeria top Group C after their opening day win against Liberia.
Ifeanyi Emmanuel
Copyright ANS