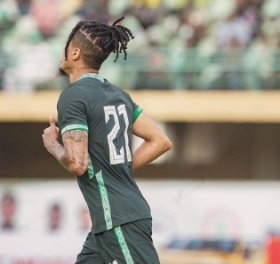 Allnigeriasoccer.com understands that the Nigeria Football Federation will in the coming hours, if not minutes, release a statement that two Super Eagles players originally named in the traveling party to Cape Verde did not travel after all.
Benfica loanee Tyronne Ebuehi and Bordeaux winger Samuel Kalu initially tested positive for coronavirus in the final round of testing before the team jetted out to Cape Verde.
However,  there is a new development as a second test came back negative this evening, but unfortunately both players are all but ruled out of tomorrow's showdown at the  Estádio Municipal Adérito Sena, Mindelo.
Without revealing the identities of the players, manager Gernot Rohr hinted as much after the end of training on Monday evening, saying that he has only nineteen players available for selection due to some Covid-19 related absences.
Losing Ebuehi and Kalu will be a big blow to Nigeria as they were set to be involved in some capacity against the Blues Sharks.
While the Venezia defender was the number one candidate to replace Ola Aina at right-back, Kalu was in contention for an attacking role with Leicester City's Kelechi Iheanacho and Everton's Alex Iwobi barred from traveling to Cape Verde.
On a positive note, all the nineteen players, including three goalkeepers, currently in Cape Verde trained without any limitations in the final workout on Monday evening.
Ifeanyi Emmanuel
Copyright ANS