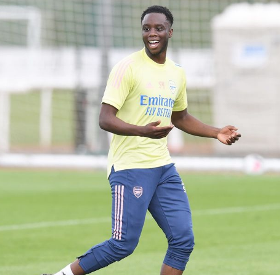 Arsenal manager Mikel Arteta called up Nigeria-eligible midfielder James Olayinka to first team training on Monday, September 6 in preparation for their next Premier League game against Norwich City, allnigeriasoccer.com reports.
With several Arsenal's first teamers and academy stars not loaned out away on international duty, Olayinka was among the lucky youngsters promoted to first team training by the Spaniard.
A product of the Hale End Academy, Olayinka had wanted to go out on loan before the transfer window closed for business but there was no interest from Football League clubs as he only recently recovered from injury that sidelined him for a large portion of the second half of last season.
Despite an injury-plagued campaign, the 20-year-old made 21 appearances in all competitions for loan club Southend United, scoring three goals.
A box-to-box attacking midfielder, Olayinka has yet to make his senior debut for the Gunners, but was a reserve option against Standard Liege and Liverpool in the Europa League and Community Shield respectively.
He was born after January 1, 2000 so will certainly be registered as an U21 player in Arsenal's Premier League squad for the first half of the campaign.
Ifeanyi Emmanuel
Copyright ANS