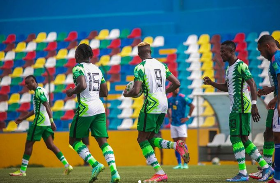 Nigeria claimed all three points on Tuesday in their second Group C 2022 World Cup qualifier against Cape Verde away at the  Estádio Municipal Adérito Sena, Mindelo.
The three-time African champions went behind in the 20th minute when Cape Verde's Dylan Tavares pounced on a lofted pass from midfield and beat the Nigerians' offside trap and hit the ball past Maduka Okoye in goal.

Chidera Ejuke went close to equalising for the Eagles but his rasping shot in the 28th minute was brilliantly parried away for a corner kick by Cape Verde goalkeeper Vozinha.

Napoli striker Victor Osimhen however restored parity two minutes later as he finished from close range after the hosts' goalkeeper failed to claw away the ball effectively after a defender inadvertently deflected a Jamilu Collins cross.

Osimhen presented a scoring chance for Ahmed Musa in the 56th minute with a great cross but the captain's ensuing shot was tame and easily gathered by Vozinha.

Kenny Santos under pressure from Onyekuru gifted the Nigerians a goal when his horrible back pass in the 76th minute beat Vozinha who was out of his lines.


Julio Tavares's 88th minute header almost beat Maduka Okoye in goal for Nigeria but the ball agonizingly came off the foot of the post and rolled out for a goal kick.
Nigeria top Group C of the 2022 World Cup qualifiers with six points, three more than Liberia, while Cape Verde and Central African Republic have one point each.
Izuchukwu Okosi
Copyright ANS