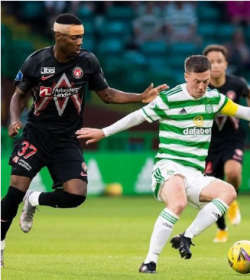 FC Midtjylland's Nigerian midfielder Raphael Onyedika has been nominated for the Danish Superliga Young Player of the Month for August 2021, the Superliga informed on Wednesday, September 8.
In his bid to win the monthly accolade, the FC Ebedei product has to see off competition from Mohamed Daramy (ex-FC Copenhagen), Victor Kristiansen (FC Copenhagen), Tobias Bech (Viborg FF), Oliver Villadsen (FC Nordsjælland) and Mathias Ross (AaB).
Despite his lack of experience in the top-flight before the season started, Onyedika was one of the players touted to replace Frank Onyeka in the Midtjylland midfield after the Super Eagle transferred to Brentford.
The 20-year-old has broken into the starting line-up of the Wolves, starting six of their seven matches in the Superliga in the new season, including four consecutive starts in August.
In the period under review, Onyedika helped Midtjylland collect nine points from a possible twelve in the division, and had an excellent disciplinary record with no caution received.
He is expected to display his wares in the group stage of the Europa League in the coming days having been registered for the competition by Midtjylland.
Onyedika netted an extra-time winner against Glasgow Celtic in the second qualifying round of the Champions League back in July.
Igho Kingsley
Copyright ANS