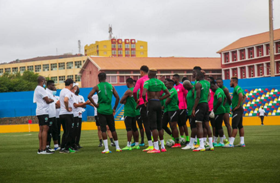 Samuel Kalu is set to miss his first game of the season when Bordeaux host Lens at the Stade Matmut-Atlantique on Sunday, September 12.
Regional daily French newspaper Sud Ouest has confirmed that the Super Eagles winger has been barred from taking part in the matchday five fixture after visiting an orange-list country during the international break.
Kalu returned to France on Thursday after Super Eagles duty and has to quarantine for seven days after his trip to Nigeria.
His quarantine period would have been ten days if he had been named in the traveling party to Cape Verde on Monday.
The Nigeria Football Federation axed him from the roster at the last minute after he tested positive for coronavirus, only for his second test result to come out negative.
Kalu has started two of Bordeaux's first four league fixtures in the new season and was introduced as a substitute in the remaining games.
Josh Maja is unlikely to be included in the matchday squad for the visit of Lens as he is still recovering from a back issue.
Igho Kingsley
Copyright ANS