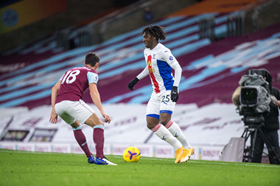 Crystal Palace wingers Michael Olise and Eberechi Eze have gone under the radar in the new season because of injury-related absences.
Olise is a player of interest to Super Eagles manager Gernot Rohr who attempted to include him in his squad for the 2021 Africa Cup of Nations qualifiers against Benin and Lesotho but was unsuccessful, while Eze was called up to train with the three-time African champions in March 2017, before he became provisionally cap-tied to England.
The return of the former France U18 international from injury is imminent after recovering from a back issue, while Eze remains sidelined after suffering a serious training ground injury in May.
Providing the latest injury update on his squad ahead of the Premier League meeting with Tottenham Hotspur, manager Patrick Vieira said to Palace's official website : "Michael has been working well in the last two weeks and has trained all week with the squad. He will be involved in the game tomorrow [Saturday 11th].

"It’s good news for the football club, it’s good news for him. He was really frustrated but we have had to go through the process to get him fit and he’s been doing really well. He will be part of the group tomorrow."
Vieira was careful not to provide a timetable for Eze's return from injury, the ex-Arsenal skipper confirmed that Anglo-French-Nigerian is a long-term absentee.
"Eze and Nathan are progressing. It will still take a while for them to come back and start training with the team.

"It’s difficult to put time on that because they’re quite long-term injuries. We want to do things well and there’s a process to go through.
"At the moment they’re doing well but it’s too early to talk about them coming back and getting involved with the first-team."
Crystal Palace, without Eze and Olise in the squad, have drawn twice and lost two of the four games in all competitions that the two players of Nigerian descent have missed.
Igho Kingsley
Photo Credit : cpfc.co.uk
Copyright ANS