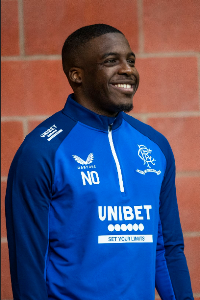 Nigeria underage international Nnamdi Ofoborh will learn more about his future at Scottish Premiership champions Glasgow Rangers next week.
The former Flying Eagles star was one of the new faces brought in to reinforce the Rangers squad before the season started but has not kicked a ball in a competitive fixture since then after medical scans revealed a red flag in a heart test.
Speaking at Friday's pre-match press conference, manager Steven Gerrard confirmed that he will not be able to count on the services of Ofoborh for today's clash against St Johnstone.
"Ryan Jack has had a positive week but won't be involved at the weekend, same as Nnamdi," Gerrard told reporters.

"We are still waiting for some results from the specialist in terms of Nnamdi, but should have an update in about six to seven days time on him."
Ofoborh had stops at the youth teams of Tottenham Hotspur, Millwall and Bournemouth before joining Rangers on a four-year deal this summer.
Nigerian trio Joe Aribo, Leon Balogun and Calvin Bassey have been selected in the starting line-up for Saturday afternoon's match at McDiarmid Park (Perth).
Ifeanyi Emmanuel
Copyright ANS
All rights reserved. This material, and other digital content on this website, may not be reproduced, published, rewritten or redistributed in whole or in part without prior express written permission from allnigeriasoccer.com