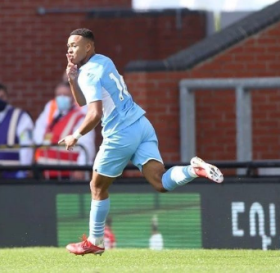 Manchester City are now top of the Premier League 2 standings with ten points following their 4-1 rout of Chelsea at the Academy Stadium on Saturday afternoon.

Tai Sodje, nephew of retired Nigeria internationals Efe and Sam Sodje, played a key role for the Citizens by scoring a brace - his first in the division following his promotion to the development squad in 2021-2022.
The Flying Eagles hopeful and England youth teamer Sam Edozie started for Manchester City, while Bryan Fiabema and Tariq Uwakwe went the distance for Chelsea.
Manchester City fell behind when Harvey Vale slotted home from close range on 9 minutes, but they were level midway through the first half as Sodje tapped in the loose ball after a free-kick from Palmer.
James McAtee scored a penalty awarded in the 78th minute after Sodje was brought down in the box to make it 2-1 and Edozie scored Man City's third goal three minutes into stoppage time.
Sodje wrapped up the scoring with almost the last kick of the game in the 96th minute.
The 2003-born striker's brace took his tally for the season to three in the Premier League 2 after opening his account in the last game before the international break, against Manchester United.
Igho Kingsley
Copyright ANS