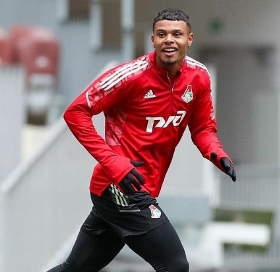 Faustino Anjorin has made his first competitive appearance for Lokomotiv Moscow since his loan move to the Russian Premier League side from European champions Chelsea and was on the winning side in a 2-0 victory over Krylya Sovetov Samara on Saturday afternoon.
Wearing the number 10 on the back of his jersey, the England youth international of Nigerian descent stepped out onto the RZD Arena turf in the 83rd minute as replacement for Fedor Smolov.
Two second half goals scored by François Kamano were enough to give the Railwaymen victory over the newly promoted club.
Anjorin, one of the hottest teenage prospects in English football, has been loaned to Lokomotiv Moscow for the remainder of the 2021-2022 campaign to get a taste of first team football and the deal came with an option to buy.
Despite spending few minutes on the pitch, the Chelsea academy graduate has insisted that he could have done better on his Russian Premier League debut.
"How can I rate my debut? Okay, but I could have played better, " Anjorin told Sport Express.
Other players of Nigerian descent who have played for the Lokomotiv Moscow include Brian Idowu, Victor Obinna, James Obiorah and Peter Odemwingie.
Ifeanyi Emmanuel
Photo Credit : fclm.ru
Copyright ANS