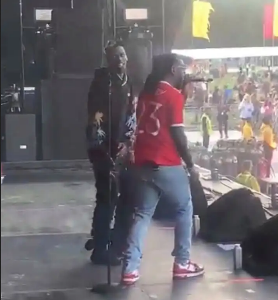 Paul Pogba swapped his football boots for dancing shoes after Manchester United's thumping 4-1 win over Newcastle United on Saturday, jumping on stage with Burna Boy to celebrate.
Cristiano Ronaldo powered the Red Devils to victory with a double on his debut, before Pogba set up Bruno Fernandes and Jesse Lingard's strikes to wrap up an unforgettable day at Old Trafford.

Pogba made the short journey to Heaton Park, where the Parklife festival was in full swing on day one.

The 2018 World Cup winner then went to join Burna Boy on stage at Parklife.

Burna Boy, the Grammy award-winning Nigerian Afrobeat powerhouse, was in the Old Trafford crowd on Saturday watching United romp to victory before his show.

The 30-year-old posted a shot of himself watching the match in a 2021-22 United home shirt with No 23 and his name written on the back of the jersey.

He wrote on social media: 'Watched my brother kill it! @paulpogba.'

Burna Boy was still wearing the kit hours later on stage as he danced alongside Pogba, whose beaming grin revealed just how much has changed at Old Trafford.