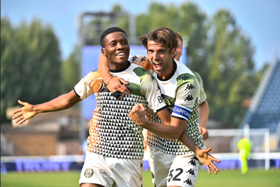 David Okereke has refused to draw comparisons between his magnificent goal in Venezia's 2-1 win at Empoli on Saturday and George Weah's wonderful solo goal against Hellas Verona on September 8, 1996.
The Club Brugge loanee opened his account for Venezia in stunning style after coming off the bench.
It was a stunning moment of individualism and a one man show in all its glory as the former Nigeria U23 international received the ball in his own half, blew past the Empoli players before slotting home from just inside the box to give Venezia a two-goal advantage, less than two minutes after his introduction.
Okereke's first goal in Venezia's colours came three days after the 25th anniversary of Weah's 85th minute effort against Verona.
Reacting to his strike, Okereke said to DAZN via Calciomercatio : "Italian football is another life, we suffered a little but we managed to win.
"Goal? I did it all by myself because there was no one there, I'm very happy with how it ended. In training camp it helped us being together by creating the group".
Prior to the international break, Venezia were rooted to the bottom of the Serie A standings but they are now 18th in the table thanks to goals from Thomas Henry and Okereke.
Ifeanyi Emmanuel
Photo Credit : veneziafc.it