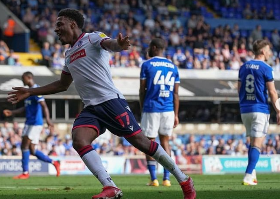 Former Chelsea schoolboy Dapo Afolayan has revealed that Wigan Athletic previously turned down the chance to sign him before he became a Football League star.
During his time with non-leaguers Solihull Moors in 2018, the Anglo-Nigerian was on trial at the Latics but they opted against signing him as they had better players.
Afolayan later moved to West Ham United, for whom he made one appearance, before sealing a permanent transfer to Bolton Wanderers in the recently concluded transfer window.
He clocked 24 on Saturday, September 11 and marked his birthday in style with a memorable first half brace for Bolton Wanderers in their 5-2 road win against an Ipswich Town side managed by Paul Cook, who was in charge of Wigan when the decision not to sign Afolayan was made.
Afolayan was pleased to hear that he was praised by Cook after yesterday's clash at Portman Road.
"It’s always nice to hear that from opposition managers. I spoke to him after the game. He’s a good guy," Afolayan was quoted as saying by Manchester Evening News.

"I went on trial when he was at Wigan when I was younger, so I’ve known him for a while. It’s always nice to hear that from opposition managers."
On being rejected by Wigan Athletic three years ago, he said : "They had bigger and better things at the time".
Only Morecambe's Cole Stockton and Lincoln City's Anthony Scully have scored more goals than Afolayan after seven rounds of matches in the English third-tier so far this season.
Igho Kingsley
Photo Credit : bwfc.co.uk
Copyright ANS