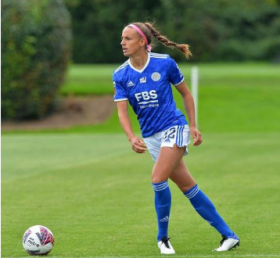 Newly-promoted Leicester City are without a win after their first two matches in the new Women's Super League season following their 3-1 loss to Manchester United at the King Power Stadium on Sunday afternoon.
The Foxes squad was captained by Super Falcons hopeful Ashleigh Plumptre, who has been left out of the latest Nigeria squad for the upcoming Aisha Buhari Invitational Women's Tournament taking place in Lagos.
The former England youth teamer made her unofficial debut for the African champions in a friendly against Slovenian side NK Olimpija Ljubljana in July 2021.
Plumptre was inserted back into the starting lineup after she was a reserve option on the opening day of the season at Aston Villa.
Toone opened the scoring with a long range striker in the 36th minute before ex-Chelsea star Thorisdottir opened her United account two minutes after the restart.
On the hour mark, Abbie McManus halved the deficit when she rose highest to head home Devlin's corner, only for Thomas to score United's third goal less than two minutes after coming off the bench.
Plumptre came close to reducing the arrears but her header went narrowly over the bar and she cleared a goal bound effort off the line in the closing minutes.
Ifeanyi Emmanuel
Photo Credit : lcfc.com
Copyright ANS