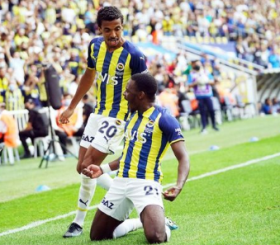 Nigerian-born wingers Anthony Nwakaeme and Bright Osayi-Samuel were on target for their respective clubs in the Turkish Super Lig on Sunday, September 12.
At the Medical Park Stadyumu, Trabzonspor came from behind to avoid their first defeat of the new season, drawing 2-2 with Istanbul giants Galatasaray.
Emre Kilinc's brace saw the visitors establish a two-goal cushion, before Andreas Cornelius halved the deficit at minute 41.
Sixteen minutes into the second half, Nwakaeme slotted home emphatically from close range after a lovely pass from Marek Hamsik, taking his tally to four goals in four matches this term.
For the sake of clarity, the experienced winger, one of the most consistent Nigerian players in Europe over the last three seasons, has no international caps to his name as the 2018 World Cup qualifier vs Algeria in which he featured was forfeited after Nigeria fielded an ineligible player.
At the Ulker Stadyumu Fenerbahce Sukru Saracoglu Spor Kompleksi, Bright Osayi-Samuel opened his account for the season as Fenerbahce were held to a 1-1 draw by Azubuike Okechukwu's Sivasspor.
The former Queens Park Rangers winger blasted the ball into the back of the net after a scramble in the box midway through the first half to give Fenerbahce the lead.
Prior to the visit of Sivasspor, Osayi-Samuel had not scored for the Yellow Canaries since March 8, 2021.
Uncapped at international level, the 23-year-old is open to playing for his country of birth Nigeria even though he is eligible to represent England.
Ifeanyi Emmanuel
Copyright ANS