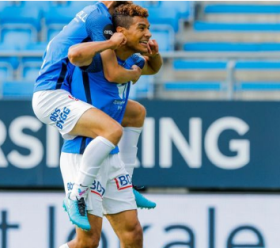 Nigeria-eligible striker Ohi Omoijuanfo is in the form of his life and is seen as a strong contender to win the Norwegian Eliteserien top scorer award in his final season with Molde.
The former Manchester City trialist will join Serbian champions Red Star Belgrade on a three-and-a-half-year deal when the transfer window reopens for business in January.
Molde have ambitions of winning the league this season and rejected a bid of 800,000 euros from Red Star Belgrade in the summer, paving the way for Omoijuanfo to join the SuperLiga side as a free agent.
The Norwegian-Nigerian is having his best spell since turning professional with his brace in Molde's 4-0 rout of Mjoendalen at the Aker Stadium on Sunday evening taking his tally for the season to 20 goals in the league alone.
That's five goals more than Lillestrom's Thomas Olsen and eight ahead of the third top scorer in the division, Viking's Veton Berisha.
The number one striker in Norwegian football at the moment, Omoijuanfo needed only fourteen minutes to break the deadlock against MIF and scored Molde's third goal with eight minutes left on the clock.
The 27-year-old was handed his only Norway cap by ex-Super Eagles coach Lars Lagerback in a friendly against Sweden in June 2017.
Ifeanyi Emmanuel
Copyright ANS