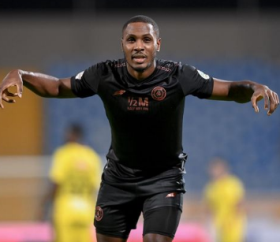 Two strikers named in Nigeria's squad for the 2019 Africa Cup of Nations Paul Onuachu and Odion Ighalo have taken their tally for the season to four each in all competitions after getting on the scoresheet in league matches played on Sunday, September 12.
In a Belgian First Division A clash at Luminus Arena, Racing Genk goal machine Onuachu thought he had scored a decisive goal when he opened the scoring from the penalty spot in the 73rd minute against Royale Union Saint Gilloise.
But RUSG's number 9 Deniz Undav ensured honours were shared when he headed in the equaliser with almost the last kick of the game in the 95th minute .
Onuachu's other league goals this season came against KV Kortrijk and OH Leuven, and he opened his account in Europe in a UEFA Champions League third qualifying tie versus Shakhtar Donetsk.
Odion Ighalo has now scored two braces this season from the first four league encounters after his pair of goals gave Al-Shabab a 2-0 win over Al Hazm at Prince Faisal bin Fahd Stadium.
The former Manchester United star broke the deadlock in the third minute before making it 2-0 in the 87th minute and putting the game out of the reach of Al Hazm.
All his four goals in the Saudi Pro League were scored at home.
Ifeanyi Emmanuel
Copyright ANS