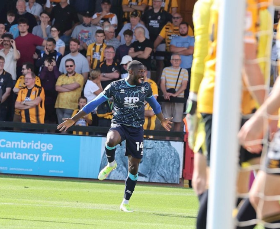 Bournemouth striker Dominic Solanke and Lincoln City winger Hakeeb Adelakun have been selected in the Team of the Week for the Championship and League One respectively on the back of their outstanding performances this past weekend.
While the Chelsea academy graduate took his tally for the season to four goals in the second-tier, the Crystal Palace-reared player was the star of the show as the Imps thrashed Cambridge United 5-1 after contributing a goal and an assist.
Bournemouth had a perfect start to the second half in their 3-0 rout of Barnsley as Solanke smashed home to make it 2-0 in the 46th minute.
The 2017 FIFA U20 World Cup Golden Ball winner is partnered in attack by Sheffield United's Billy Sharp in the Team of the Week.
Solanke played a game-high three shots vs Barnsley with two on target, made two key passes, won two aerial  duels and two fouls for his team and completed two take-ons.
A division lower, Adelakun gave The Imps a dream start when he opened the scoring with 22 seconds on the clock before providing the assist for the fifth goal at minute 72.
With a rating of 8.7, the 25-year-old was deployed as the right-sided midfielder in a 4-4-2 formation in the Team of the Week.
Adelakun played a game-high six shots with four on target, made two key passes, and was accurate in 69.2 percent of his passes.
Ifeanyi Emmanuel
Photo Credit : weareimps.com
Copyright ANS