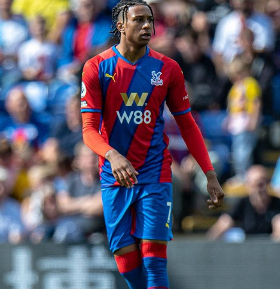 Crystal Palace U23s thrashed their Leicester City counterparts 6-1 in a Premier League 2 clash at LCFC Training Ground on Monday night, with 2021 Super Eagles invitee Michael Olise gaining valuable game time for the Eagles.
The former France U18 international was not involved in any of the matches played by Crystal Palace during pre-season preparations due to a back issue, leaving him short on match fitness.
Olise made his Premier League debut versus Tottenham Hotspur last weekend, coming off the bench to replace Jordan Ayew with four minutes left on the clock.
The current EFL Young Player of the Year started against Leicester City U23s so did teammate David Omilabu, while goalkeepers Kelechi Chibueze and Owen Goodman were non-playing substitutes for the Foxes and Palace respectively.
Omilabu opened the scoring after ten minutes as he tucked home the rebound after Olise's shot was saved by goalkeeper Brad Young, and he got his brace in the 38th minute with the former Reading star providing the assist.
Crystal Palace's other scorers were Rak-Sakyi (2) and Rob Street while Marcal-Madivadua netted a consolation for the hosts.
In what seemed to be a premeditated substitution, Olise was brought off on the hour mark in his first appearance in the Premier League 2 since December 16, 2019, when he went the distance against Manchester United U23s.
Igho Kingsley
Photo Credit : cpfc.co.uk
Copyright ANS
All rights reserved. This material, and other digital content on this website, may not be reproduced, published, rewritten or redistributed in whole or in part without prior express written permission from allnigeriasoccer.com