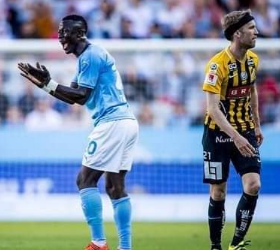 There's a big question mark hanging over the availability of newly-capped Nigeria international Innocent Bonke for Malmo's Champions League opener against Juventus at Eleda Stadion on Tuesday night.
Bonke is doubtful for the clash after picking up an injury during Malmo's Allsvenskan match against IFK Norrköping on Saturday, leading to his substitution midway through the first half.
The Bujoc Academy product has been a key player for Jon Dahl Tomasson's side in 2021, playing seven of their eight matches in the Champions League qualifying rounds.
According to the Danish coach, Sebastian Nanasi did well when he filled in for Bonke after his injury-enforced substitution.
"He was hit by a knee quite hard during the match. I dare not say exactly on the body. He came back late from the national team break and plays in a position where we are a bit exposed, " Tomasson was quoted as saying by Expressen.

"But I think "Sebbe" solved it nicely. It was not his usual role, but he took on his new role in a good way."
Bonke made his Super Eagles debut in a 2022 World Cup qualifier against Islanders Cape Verde exactly a week ago, going the distance in a 2-1 road win.
Igho Kingsley
Photo Credit : mff.se
Copyright ANS