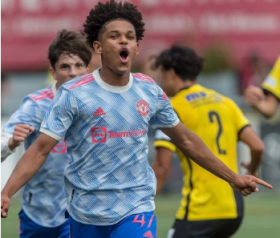 The youth teams of two Premier League giants, Manchester United and Chelsea, were in action on the opening day of the UEFA Youth League on Tuesday afternoon.
Shola Shoretire will play no part when Manchester United begin their UEFA Champions League campaign later this evening as he went the full ninety against Young Boys U19s.
First year scholar Maximilano Oyedele and Dillon Hoogewerf were omitted from United's matchday squad against the Swiss opponents.
The Dutch-Nigerian attacker has not figured for United youth teams since he was sent packing from the Netherlands U19s training camp for repeatedly reporting to training late.
At minute 14, Shoretire scored what proved to be the game-winning goal when he found the net from close range.
The England youth international had been the youngest player to feature in the UEFA Youth League, aged 14 years, 10 months and 10 days when he made his debut vs Valencia on December 12, 2018, before the record was broken by Borussia Dortmund's Youssoufa Moukoko in September 2019.
Elsewhere, Chelsea came from behind to beat Zenit St. Petersburg 3-1 at Cobham Training Centre in Surrey thanks to three second half goals from Webster, Vale and Soonsup-Bell.
Bryan Fiabema entered the game as a substitute in the 77th minute for his debut in the UEFA Youth League.
Former Golden Eaglets invitee Prince Adegoke, Richard Olise, Derrick Abu and Tudor Mendel-Idowu were not included in Chelsea's matchday squad against the Russian opponent.
Ifeanyi Emmanuel
Photo Credit : manutd.com
Copyright ANS
All rights reserved. This material, and other digital content on this website, may not be reproduced, published, rewritten or redistributed in whole or in part without prior express written permission from allnigeriasoccer.com