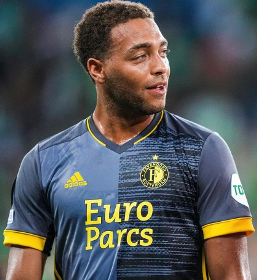 Cyriel Dessers has made his competitive debut for Dutch giants Feyenoord, whom he joined from Belgian side Racing Genk on transfer deadline day.
The one-cap Nigeria international could not debut for the Rotterdam side this past weekend because their Eredivisie match against his former club Heracles Almelo was postponed due to a tight schedule.
Dessers started on the bench in the Europa Conference League match between Maccabi Haifa and Feyenoord at Sammy Ofer Stadium (Haifa) on Tuesday evening.
Thirteen minutes before the end of the contest, he stepped out onto the pitch with the number 33 on the back of his jersey, replacing Bryan Linssen.
It wasn't a dream start to Dessers' Feyenoord career as the striker couldn't break the deadlock with the match ending in a scoreless draw.
With his game today, the 26-year-old has now totaled eleven appearances in European competitions comprising five in Europa League qualifiers, three Europa League, two Champions League qualifiers and one in the Europa Conference League.
One of the most notable Nigerian footballers to have played for Feyenoord is retired Super Eagles striker Michael Obiku.
Ifeanyi Emmanuel
Photo Credit : feyenoord.com