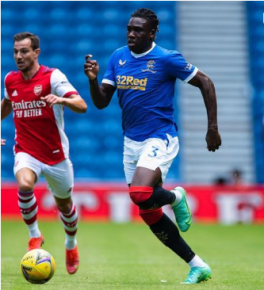 Former Tottenham Hotspur fullback Alan Hutton is tipping Nigerian left-back Calvin Bassey for a new role in central defence when Rangers begin their Europa League campaign against Lyon on Thursday.
Rangers manager Steven Gerrard has limited options at the back with Connor Goldson and Filip Helander rated as doubtful for tomorrow's game at the Ibrox Stadium while Jack Simpson has been left out of the Europa League squad list.
Predominantly a left-back, Bassey is capable of playing as a left-sided center back, a role he was often used in during his time with Leicester City U23s.
Gerrard deployed the Nigerian youngster as a central defender in a League Cup clash against Falkirk in November 2020 and he didn't look out of place, scoring his only Rangers goal to date in a 4-0 win.
"I think he definitely has all the attributes required of a centre-half,''Hutton said to Football Insider.

"I think he’s improved and matured as a player since he’s been at Rangers, and it’s a position that he knows well and that he can easily adapt to.

"With the injuries, Rangers will have to improvise with Simpson not available.

"He’s done well recently and managed to force himself into the team after Barisic’s slow start to the season.

"He was excellent in the game against St Johnstone at the weekend."
Bassey, 21, has forced his way into Rangers' starting lineup in recent weeks, starting four of their last six matches in all competitions.
Ifeanyi Emmanuel
Photo Credit : rangers.co.uk
Copyright ANS